I teach a variety of film production courses at the University of Alaska Fairbanks as part of the Film Major and the Film and Performing Arts Major degrees.

These are often stacked courses; offered concurrently with advanced students mentoring more novice ones. Students engage on unique projects relevant to the current events, opportunities, and talent of the class. Often, students produce projects which showcase the screenwriting, producing, and directing talent of our majors.

The Muse was produced in 2014 by FLM 271 and screened at multiple film festivals beginning in 2015.

Introduction to the history, theory and basic concepts of film direction. Includes interpretative script analysis, creative visualization, conceptualization, use of space, working with actors and designers, and direction of short scenes and videos.

This course is often stacked with the Acting for the Camera course (instructed by Professor Baker). Students put original and proven material to the test and film scenes and projects with an eye on directing while still operating as a production team in camera, audio, production design, script supervision, and editing.

The use of film as a documentary tool for describing and understanding scientific and cultural phenomenon has led to the education of generations. Understanding the implications of our film work with a theoretical base for cultural understanding, scientific need and educational potentials will strengthen the film’s integrity and production methods in creating video documents useful as a scientific/cultural record. Pre- production will include research of archival visual media, oral histories and print materials; analysis of educational and scientific funding and distribution options and preliminary interviews, location scouting and film treatment. Production will include time on location with small film crews, media logging and record keeping. Post- production will include basic editing of sequences for distribution.Cross-listed:ANTH F460; ART F460. 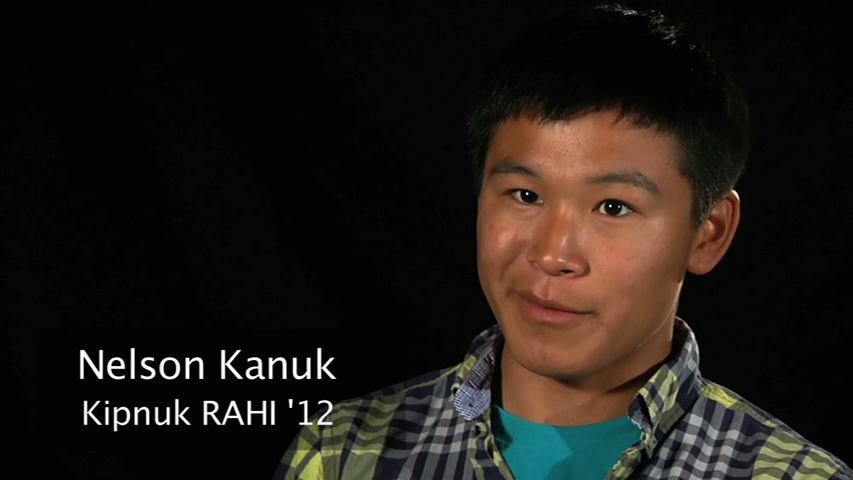 A documentary for the Rural Alaska Honors Institute was initiated by the Cross Cultural Filmmaking Course in 2012.

For a sample of work completed by students in this course please see the RAHI Portfolio.

To register for these classes please visit